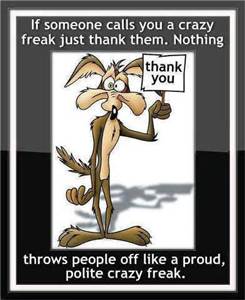 Legally, you’re supposed to be innocent until proven guilty but on the internet, the assumption is that you are a wack job until you can prove that you’re not. This last week, I’ve had two instances where I’ve been left reeling, realising that people have made that assumption about me. Being someone who believes they have an okay grip on reality and social norms, I found it quite shocking. Not that I don’t have my moments, where I look back and face-palm, but no more than most people.

I blame the whole author/book marketing attempt thing. I don’t enjoy trying to strike up online conversations with people I don’t know, and I don’t think I’m very good at it. But you have to try. I was reading one of those “helpful” articles on how to broaden your reach by attending book festivals. Unfortunately, the only ones I’ve been invited to be a signing author at are overseas and in the middle of nowhere. So, given none of the ones that don’t require a passport and a fortune in global roaming have asked me, I took the article’s advice and approached one of the regional festivals, which are more likely to appreciate your advances.

I carefully worded my introduction, polite and to the point. The response came back, equally politely that they we already set for authors. My “thanks anyway” return then bounced. They had blocked my email. Already – on that innocuous exchange. What exactly did they think I was going to do? I’m hardly going to hunt them down and start stalking them because they are a good six hour drive into the interior of Australia. Attack them in a flood of furious emails? Who knows, but any of the options would take far more energy than I currently possess. I struggle to maintain the rage with the teenagers next door playing music at  3am. Even with the kids home for school holidays, I’ve come to reluctantly admire their mess generation skills. They have raised it almost to an art form, particularly in the field of crumb distribution. I’ve reached the point where I just stand back and marvel.

The second one was a book blogger, usually one of the friendliest of the species. I wrote a quick intro, a personal one, not trying to market anything. I genuinely thought their blog was good. Again I got a four word plus emoticon response and nothing else. It was a clear discouragement to future correspondence and they usually want to talk to everyone.

Now, I’m just waiting for the third slapdown, which will possibly send me into online hibernation for good. I’m not particularly thin skinned, but there comes a point when you have to accept that you have no idea what you’re doing and clearly whatever you are doing is wrong because people are assuming you’re deranged. People like me are why PR companies are such a good idea. If I take myself out of the equation things might go better. I’ll think of myself like a guilty defendant – the best possible course is to get a good lawyer to speak for me and  then just shut the hell up.