When you write a book, it’s pretty clear you write about the stuff that interests you. Why otherwise would you bother? It takes a long time, for no definite reward at the end. Most writers, unless you’re a Clive Cussler or James Patterson, aren’t doing it for the money. Even then it’s apparent that Mr Patterson isn’t doing the writing himself anymore. Why bother when whatever you put your name to will be a bestseller? That might sound bitter, and you’d be right. A fine example of this is the man publishing under the name Stephen King, but what most people don’t realise, because they don’t read the reviews first, is that it isn’t the Stephen King.

So I write about stuff that interests me. Unfortunately, I’m not really the sunshine and cups of tea sort of writer, such as Alexander McCall Smith, whose genius lies in making the everyday interesting. The things I write about can get a little embarrassing, particularly when close older relatives want to talk about your book that has some pretty full on sex scenes in it. My standard response is to stick my fingers in my ears and sing the theme song to The Muppets until they give up.  The downside to that is the song gets stuck in your head for days afterwards. I bet its in your head right now, going round and round because, like me, you can’t remember all the words.

I tried something new with my last book. It was clean – no sex or swearing, though still pretty dark, because that’s just the way I roll. I wanted at least one book in my career that I’d be okay with relatives and my kids reading at some stage. I am quite happy with it, and am now waiting, hoping that my agent agrees. So, whatever happens with this one, there is no font for embarrassment, on subject matter at least. The writing may be crap and the storyline line complete rubbish, but there’s no hanky panky or bad words. Because nobody knows about those. Right…

I’m going to admit something embarrassing here, because why else does one write a blog except to expose yourself: I get a ridiculous amount of enjoyment out of some pretty questionable reading material. I’ll read almost anything from space opera to historical bodice rippers, crime fiction to teen fiction. It doesn’t even have to be the best of its genre, sometimes its better when its not. And though I sometimes laugh at the ridiculous premises, I love a good hot alien capturing a human woman whose been done wrong by men all her life. Entertaining shenanigans ensue, because she’s feisty and he secretly loves it. Even though I know from the first page that they’re going to live happily ever after, I can skim the fluffy pages at the end, because that’s not what I read that sort of book for. I just like to know its there.

But what about the not so pleasant stuff? I just finished Tight by Alessandra Torre and though I’ve loved her other books, particularly Black Lies, the imprisoned and torture topic just doesn’t work for me. I realise it was a side line to the main part of the book, but interestingly she referenced the genre that’s out there and quite a lot of women like to read it. It’s one thing to like something in the privacy of your kindle, but the authors who write the stuff are the ones who are really deserve the bravery award. Some of them are hiding behind some pretty obvious nom de plumes, but some aren’t. Are they also having these awkward conversations with relatives? It makes my level of discomfort kindergarten stuff. So even though I don’t want to read about women being tied up and whipped or having sex with Big Foot, I applaud the writers like E. L. James who take their most secret thoughts and fantasies and put it out there.  It can’t be easy when there is a wild and windy plane of mortification to cross, knowing you may never reach the other side. 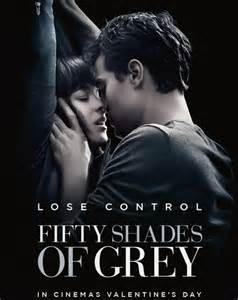 I went to see Fifty Shades of Grey last night, despite the terrible reports I’d heard. Mostly because it was a night out with the girls and I’d already bought the tickets. So my expectations weren’t high, which coupled with the lovely wine we had during the movie, turned it into a much better than anticipated evening’s entertainment. Frankly, on the way out I was wondering what it was exactly that people were objecting to, calling it glorified domestic abuse, appalling, worst movie ever, etc.

Clearly there were a lot of people watching it who hadn’t read the books, which given how well they sold is surprising in itself. This was made abundantly clear by the groans and calls of “What!!” at the final scene, which was identical to where the first book ended and should have surprised no one. The book gives more context to what happens in the end, but the movie was far superior in the way you didn’t have to listen to an annoying inner monologue about “inner goddesses” leaping about repeatedly. The sex scenes were tastefully done and there were moments of humour. I thought Dakota Johnson was very good and captured the conflict the heroine feels perfectly. Sure it’s about BDSM, but more than that, it’s about pushing personal boundaries.

Most of us in our twenties did this, maybe not exploring kink, but in other ways. It could have been seeing how long you could go without sleeping. My record for this is nearly 36 hours, where I went to uni on a Friday morning, then straight to work behind the bar at a nightclub where I worked a 12 hour shift until 6am then drove an hour outside Sydney to a skydiving centre and jumped out of a plane. By the time I finally got to bed it was early afternoon.  I generally partied hard, drinking and dancing for hours, pushing my body to do more, imbibe more, keep going longer and longer. This is what you do when you are young. How do you know what you are capable of if you don’t test it?

If you haven’t seen the movie and plan on being surprised, stop reading here. The final climactic scene, where Christian whips Anna too hard and she breaks up with him, has been called by one reviewer as glorified domestic violence. I think this is a simplistic interpretation. She asks him to do it, to show her what it is he wants, testing both her limits and his. His limit is clearly further than hers, but when it becomes too much she doesn’t safe word out. In the second book this is explained as “she forgot” and he gets upset with her for not saying stop, even though he reminded her before they started. If she had said the safe word “red” and he hadn’t stopped, then I’d agree it was domestic violence. Though I don’t get the attraction to BDSM, I do understand wanting to see how far you can go with things. This scene is similar to any video of extreme sports – base jumping, free running, skateboarding or snowboarding when someone attempts a skill and doesn’t pull it off. They went to the edge and fell off. Do you think less of the snowboarder who tries their best but still stacks it? No, but because it’s sex that is the medium rather than snow, there’s far more judgement. Just because we wouldn’t personally attempt something doesn’t make it our right to say that no one should.

“If, to go from A to B, the characters take longer than you would like, then the film you are seeing is pornographic.”

If you change “film” to “book” and “seeing” to “reading” does it still count? I love to read as well as write steamy novels but would only ever jokingly refer to them as porn. It’s not like I skip (much). I really need to buy into the characters or I find I’m just bored, because really, the mechanics of it all is pretty much the same in books of this genre. I think that’s why Fifty Shades was so huge – it was something a bit different from the mainstream but kept within certain boundaries (monogomy & they were already in a relationship when they started). I admire anyone who publishes under their own name when writing about the more extreme end of the spectrum, after all, you can’t stop your grandmother buying it once its out there on Amazon for $1.99 (there’s always a helpful younger cousin or neighbour). I will admit to a few qualms and mine, while fairly explicit, is still pretty vanilla in terms of what happens. Still the thought of the older generation of relatives purchasing it and having to face up to them at Christmas or family functions did cause a few nightsweats.

And why is no one talking about violence? My main character decapitates someone with a kitchen knife, but no one even mentions it. What’s up with that??